Let’s have a show of hands:  How many of you have kept the New Year’s resolutions you made last January?

Just as I thought.  Me neither.  (In fact, I can’t remember what mine were.  They seemed profound at the time….)

So why are we so bad at accomplishing the stuff that resolutions are made of?  The very stuff that we know will make us better human beings?

Theories abound.  But one put forth by Peter Bregman (a Harvard Business Review contributor and management guru) particularly speaks to me.  The thumbnail:

So what’s Bregman’s solution to this dilemma?  Step One:  Recognize that you’re afraid of failing.  Step Two: Just go at it and fail.

Actually, Bergman throws in a Step One-and-a-Half:  an exercise that requires you to ‘visualize failure.’ (We’ve come to the ‘woo-woo’ part here.  Bear with me….)

‘Visualizing failure’ involves asking yourself, ‘What’s the worst thing that could happen if I fail at [fill-in-the-blank]?’  Now, visualize the realistic answer.

Getting to this answer is easier, I’ve found, if you close your eyes and imagine all the details of that ‘worst thing.’  (Where are you?  What are doing?  Wearing?  Who else is there?  What are they saying?)  In other words, watch yourself in your own movie.

Now that was fun, but so what? How’s it getting to the ‘just do it’ stage?

Well, here’s the thing:  Once you’ve written, directed and acted in your own personal horror show (playing now in a brain near you…), you’ve identified the worst-case outcome and, in the process, you’ve contained your fear.  That ‘fear-busting,’ in turn, allows you to take risks.  More specifically, visualization can:

Returning, for a moment, to the New Year’s resolutions example:  Visualization will make you realize that anything you do in furtherance of reaching your goals is going to be better than abandoning your resolutions altogether.  Failure = Status Quo.  So do it already!

Visualization works any time you feel immobilized –- especially when you don’t know whether to take a risk:  Just sit back and ask yourself what the worst outcome could be.  Then visualize the (realistic) answer.  Get used to that possibility.  Is it something you could live with?  If yes, take the plunge.

A final example from the business world:  I first heard of ‘visualizing failure’ from a business division head at a 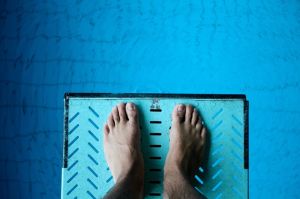 company I worked for.  We were sitting in an executive team meeting, where the day’s topic was decision-making.

When it was his turn to describe how he makes decisions, my colleague focused on business situations that involve both high risk and (potentially) high reward.  He explained that, whenever he felt uncertain about what to do (take the risk? not take the risk?), he would ask himself, ‘What’s the worst thing that could happen?’

If his answer (i.e., his ‘visualized failure’) involved nothing worse than being fired by our company’s CEO, my colleague said he would go ahead and act.

End of story? Not only did my colleague avoid being fired by the CEO. Today, he is the CEO.

Jane E. Owens, The Mentorist’s chief blogger, has spent her career immersed in the business and culture of corporations and law firms. A former general counsel and corporate lawyer, Jane is fascinated by those who thrive (as well as those who don't) in the professional world – and, through her mentoring practice, hopes to increase the ranks of the former. To learn more about Jane or suggest topics you'd like The Mentorist to discuss, go to: www.mentorist.co

The Mentorist aims to be a “take-charge-of-your-career” guide for lawyers and business professionals. The blog provides frank and practical advice on a topic that matters to career success – in other words, the conversations you wish your boss were having with you.

Jane E. Owens, The Mentorist’s chief blogger, has spent her career immersed in the business and culture of corporations and law firms. A former general counsel and corporate lawyer, Jane is fascinated by what it takes to thrive in the professional world. Her view on “the right stuff”? If you weren’t born with it, you can learn it. To read more about Jane, Click Here